Our federal government is failing us in many ways when it comes to addressing climate change and advancing clean energy.

One area that is working: The Department of Energy’s ability to seed and grow clean energy innovation — innovation that is driving new investments, creating new jobs and reducing our country’s carbon emissions.

Over the past decade, energy innovation projects funded by just one DOE program — the ARPA-E (Advanced Research Projects Agency-Energy) program — have resulted in the formation of 76 new American companies, attracted nearly $3 billion in private-sector investments and produced 346 new patents.

Still other DOE programs are directly responsible for the innovation and sharp price reductions that have helped spur the dramatic growth of solar, wind, geothermal and battery technology in recent years.

This week, I was honored to testify before a congressional committee about another important byproduct of energy innovation that DOE helped foster: Jobs.

As I told members of the House Committee on Appropriations, (see here for recording ) DOE clean energy programs have played a critical role in the creation of 3.3 million clean energy jobs in America. 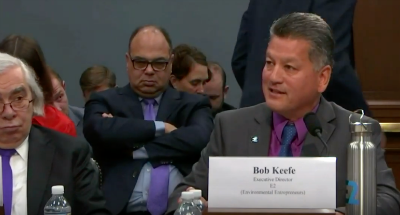 And if members of Congress don’t continue to fund DOE aggressively, I told them, they will hurt innovation, investment, competitiveness — and clean energy jobs — in America.

One example I gave to lawmakers was that of E2 member Steve Melink.

Steve’s 100-person company, based in Cincinnati, designs and supplies clean energy solutions — solar, energy efficiency, geothermal — to big companies like hotel and restaurant chains and factories. As Steve told me recently, the most energy efficient heating and cooling system known to exist are geothermal HVAC systems. Problem is, geothermal is initially expensive and hard to install. Thanks to a Department of Energy Small Business Innovation Research (SBIR) grant, Melink Corp. is about to introduce new technology that could dramatically reduce the cost and substantially increase the adoption of geothermal energy in our country — saving money for big users of energy while reducing their — and our country’s — carbon emissions. Steve’s company currently employs more than 100 people, and is growing fast. He’s about to open a new headquarters building outside of Cincinnati to house current and future employees, creating some local construction jobs in the meantime.

Scout Clean Energy, a Colorado-based company owned by E2 member Michael Rucker develops major wind projects in over a dozen states. Behind every wind turbine that Michael’s company erects is some of the most advanced wind energy technology available — technology that probably wouldn’t exist without DOE clean energy programs. Michael tells me that Scout is now planning to install energy storage systems — batteries — with its wind projects that will allow it to produce and distribute clean, emissions-free, renewable energy even when the wind isn’t blowing. That wouldn’t be possible without technology and companies that exist in part because of Department of Energy programs.

Lastly, I told lawmakers, to see the companies and jobs of America’s future, look to places like cleantech incubator Greentown Labs in Boston, or in the portfolios of cleantech investment groups like Element 8 in Seattle, both of which are led by E2 members.

Not long ago, a group of cleantech incubator CEOs (including Greentown Labs’ CEO and E2 member Emily Reichert) and I met with members of Congress to talk about the consequences of cutting DOE funding. What Emily and others uniformly and unequivocally said was this: Without DOE programs, hundreds of promising start-up companies developing the next-generation of energy technology in America simply would not exist — nor would the domestic jobs, economic potential and environmental and climate change benefits they’re producing and will produce in years to come.

America has a good thing going when it comes to DOE clean energy programs.